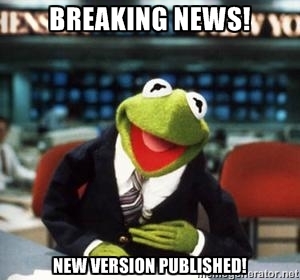 It’s been a while, but we’re not done yet. A new version of “Everyday Unit Testing” arrives!

Let’s see what we have in this one:

First of all, I’ve made “From Legacy To Testable Code” its own chapter. I’m not done with it yet, so expect more. I’ve also organized it in sections. In addition, there’s some more info in there about code organization and introducing fields. I’ve also added a description about clearing a path towards testability.

Speaking of testability, I’ve added a section about the relationship between testability and good design. As I answer a lot of these questions, I thought it should be there as well, under the “Guidelines” chapter.

I’ve added a couple of sections to “Unit Testing Economics” about the perceived and actual cost of testing, as well as the value of unit tests and triangulation. There’s more where this came for as well.

I’ve started adding content to two chapters: “What to unit test” gets analysis for writing unit tests (and when not to), and “Writing Unit Tests” gets a section on multiple asserts.

Plus some editing, readability that I like so much, and “what the hell were you thinking when you wrote it” fixes.

I hope the next time I publish “Everyday Unit Testing” is not that far ahead. Until then, hit me with your feedback!

Get the book now!

I know it’s been a while, but the Everyday unit testing book is not going away! I’ll try to pick up speed, while you can give me feedback on v.05 of the “Everyday Unit Testing” Read more…

I was apparently mistaken when I said I’d publish small stuff over time. We’ll see how it goes. I’ve got a full chapter (so far) of Everyday Unit Testing: • Unit Testing Economics. – History Read more…

You’ve probably seen it coming. I started a series of posts about unit test attributes here, and then went into them in details. I now morphed the series of posts into a section into the Read more…