Whenever we learn a new skill, and go deeper, it feels like we’re climbing a stairway to mastery.

A few years ago, I described how people get into unit testing, and their journey along the path, as walking up a staircase. I’ve seen many people go through this. 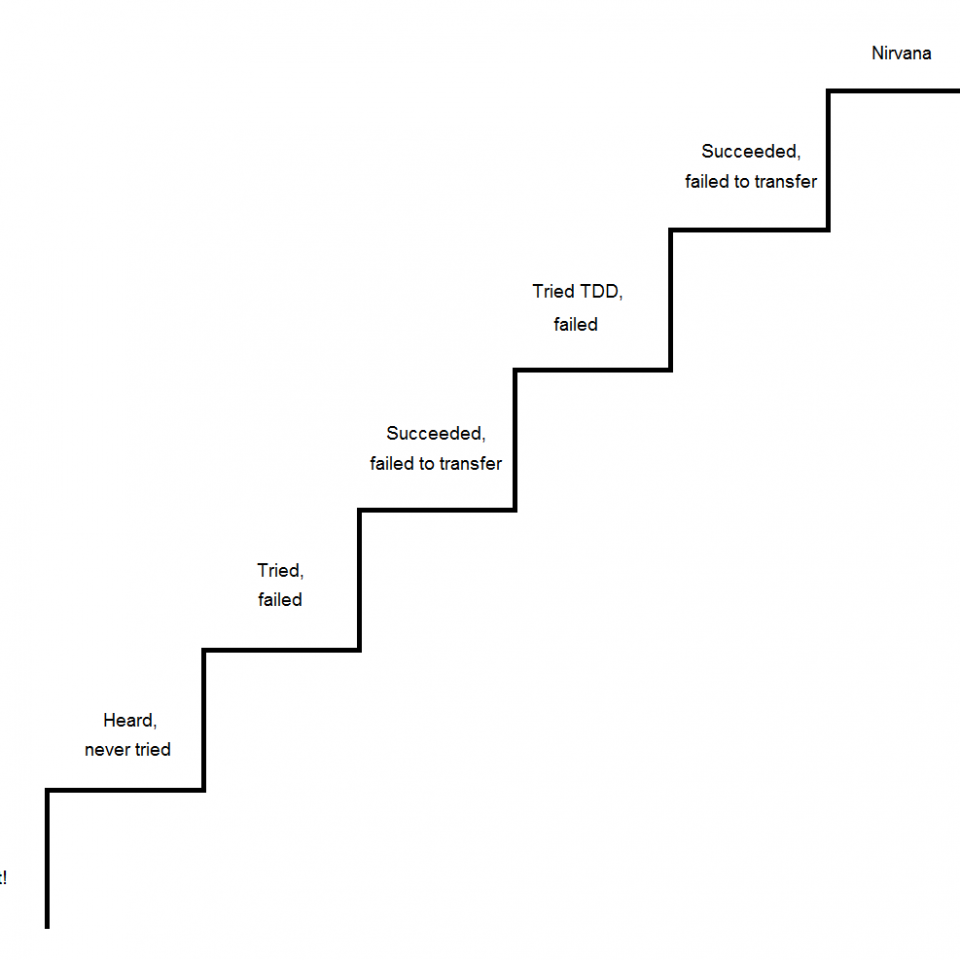 Our stairs are very slippery. In every step, we can slip and fall off the stairs. That’s why we get less and less people on the top stairs. Persistence and discipline keep us moving up.

Most people start by hearing about unit testing. They’ve  heard about unit testing in a conference, or read about it in a blog, but have never tried it before. Early adopters don’t stay on that step for long, because they are eager to try it. But most people stop there and wait until an opportunity comes up to try it. This can be a new project, or a new team that has the capability to learn. Then they jump in the pool.

When they get to the trial stage, lots of people fail. Specifically, it’s not that they fail, but they conclude that unit testing is not for them. It’s easy to find excuses for this – technology, time for learning, and the fact that it’s damn hard. So many slip off the stairs at this point. They will probably not start climbing back again, and will dissuade others from taking the trip.

Those that have succeeded and managed to see the value of unit testing, usually are crazy about it. They bump into another problem: Other people don’t understand them. It’s really hard to imagine going back to not unit testing, they think: “How do these people live? Why aren’t they using this simple but valuable tool”?

There’s an actual dissonance after you’ve seen the light, and it feels worse because it’s really hard to transfer this feeling to other people. When successful, unit testing becomes a team practice, sometimes even an organization practice.   Try to explain it to your friends in another organization and they will look at you funny.

The climbers (now we’re talking dwindling numbers) who actually get to learn and use TDD, get to it after they have some experience in test-after unit testing.  Usually you don’t get to start with TDD, and when you do, like it happened to me, it’s bound to fail. To assimilate this practice takes experience and discipline.

Plain TDD is hard. If you’re working with legacy code, you have a lot of work ahead of you. Sometimes, work you’re not willing to put in. It’s ok, but that’s where the cycle of failure begins again. With the same excuses: technology, time, and it’s hard. If you happened to succeed, urging others to join is bound to fail.

The few, the happy few, who manage to get on top stair, are in unit testing nirvana. Not only do they control how they work, they influence others to work according to what they find as a best practice. Not only is it very hard to find someone like that, they aren’t really happy to leave their place.

What happens if one of this group moves to another organization, where the people don’t write unit tests? Even for a good reason to train them to start moving up their staircase?

Culture shock. It’s the same clash we saw before, but multiplied. Before, you’ve seen the light and others didn’t. Now you are holding the flashlight, and people still don’t get it.

Unit Testing Is A Journey

A couple of things.

It also means that an organizational decision of “everyone starts writing tests tomorrow” is bound to fail. Select the “ready” group first, those that are willing to try, and help them move forward. Plant the seed of awareness in other teams, so they will be ready. When they are, get mentors from the advanced (but not too advanced) teams. Grow everything slowly together.

It is a long tough process.

Get someone , like me, to help manage the process and mentor the people.