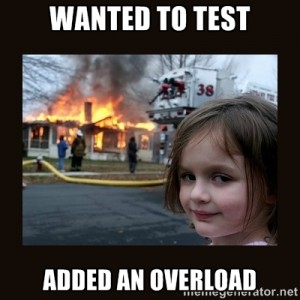 This post is part of the “Legacy Code to Testable Code” series. In the series we’ll talk about making refactoring steps before writing unit tests for legacy code, and how they make our life easier. Other posts include:

In the last post, I’ve talked about Extract Class refactoring pattern, and that sometimes in order to do that, we might want to change the signature of a method.

Turns out adding an overload helps in other cases as well.

We used a “setter” to expose to the unit test and inject internal state before. Another option is to add a controllable overload to bypass the internal state.

Let’s look at this code:

In this example, we compare an external value to an internal state. As we saw before, the option we could use is add a “setter” accessor, to allow the unit test to inject the internal value from outside. Instead, we can also add an overload:

We do the actual comparison on the new overload. The new overload should be accessible to the unit test, depending on language (so it doesn’t have to be completely public). In the original method, we delegate the call to the new implementation.

The new overload is more controllable. We can stop there, but if our logic code does not rely on state anymore, why not use Extract Class refactoring pattern?

The StreetValidator class can now be controlled and tested easily.

Time to wrap up the series. So next time, in the last chapter – using dependency injection framework.

I think that static classes, with static methods and no state, have gotten a bad rap. They are easy to test as is.

Otherwise, it’s just an example, you can create an instance if you like 🙂

Refactoring Without A Net – Webinar Recording

What exactly is refactoring? Is it just changing code? What does “not changing functionality” really means? Well, you’ve come to the right place. I’ve got just the webinar for you. And not only that, I’m Read more…