Testing is not a phase! 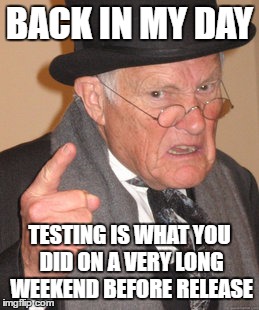 It used to be. Somewhere, squeezed between the end of development and release.

But then things changed, because they had to.

We’re testing the code as it’s being written, because we want to make sure it does what we think. We even use tests to design it.

We’re testing prototypes to see if what we envisioned makes sense.

We’re testing new technologies, because we hope at least one will eventually work. And once new ones arrive we continue testing them for our future releases.

We’re testing the way we work, to see if we can improve our learning, analysis and decision making.

We’re testing before release to see if we want to ship.

We’re testing after release to see if the product is used, how it’s being used, and what data it can provide for the next version.

We’re testing different environments, where the product resides, to lower costs, and get some benefits.

We’re testing all the time.

Testing is not a phase in the software development life cycle.